Can we feed the hungry minds of India? 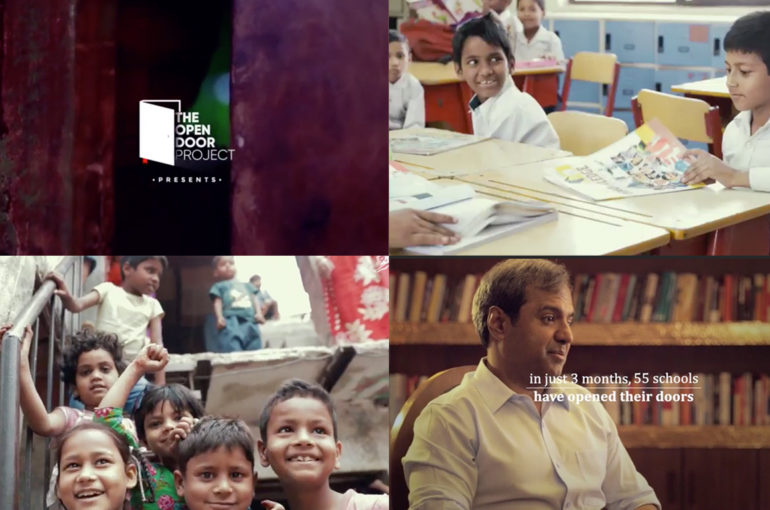 About one-third of the children living in India does not have access to quality education. There is much being done at government, NGO and private sector level to counter this, but the size of this problem exceeds all the efforts by far. The scope of this issue is striking, keeping families and communities stuck in a cycle of poverty, and makes it a complex issue to tackle. Current actions by governments and individuals can be praised, but it could be questioned if there are alternative routes to address or help solve one of the most critical tasks we see today. Is the award-winning Open Door Project an impactful step directing this issue in the right way?

About The Open Door project

The educational crisis that India is facing lies at the heart of its biggest socio-economic issues and affects over 25 million children. The Open Door project won a Bronze Lion on Brand Experience and Activation at Cannes Lions 2019 for addressing this issue in a remarkable way. Private school chain “Millennium Schools” and creative agency FCB Ulka partnered to promote the idea of private schools, opening their doors for a “second shift”. The private schools close their doors every day at 2PM, to open them again to provide a next batch of underprivileged children from the street with quality education.

With The Open Door project, 55 schools have already opened their doors to give 35,000 Indian kids access to school in just three months. What gave ground to the campaign was the movie “Bhukkad”, meaning “the hungry one”, created by FCB. The film presented a day out of the life of a sex workers’ child that converted his mother’s clients into his teachers, to give shape to his dream of education. With some of the biggest national NGOs joining the project, it got momentum and was able to grow and reach the right target groups, willing to take full advantage of the opportunity given to them.

Does it take one campaign to break conventions?

The Open Door Project was being launched in the backdrop of the World Street Children’s Day in April, with a special event hosted by one of the main partnering NGOs, that works withstreet and working children in India’s biggest cities. There “Bhukkad” was revealed. Directly speaking to the young and hungry minds of the attending children.

This campaign presents how private schools are aware of the need for broader access to education. A massive positive signal. Without access to education it’s impossible for many families in India to break out of the poverty cycle. With India being the world’s fastest growing major economy today, education is rightly considered a key catalyst that supports socio-economic mobility, needed to build an equitable and just society. However, providing relevant educational opportunities for a majority of the country’s youth is still one of the biggest challenges. The difference in socio-economic status and caste system is still a huge holdback for many children to access education.

Is the Open Door Project able to create a positive impact in this weighty scenario?

What truly interests us is the story behind this inspiring campaign. The fact that The Open Door project is an institutional response from the Millennium Schools to the problem of children out of the education net, presents the willingness to attack an actual problem and dissolve dichotomies that exist in society. To get the idea off-ground, together with FCB, a campaign was made addressing the hopes and dreams of a younger generation, by launching a movie that children from the streets can identify with.

“The main character shares one lesson with other children: that they can always find a way to learn – and give shape to their dreams no matter what.”

Beyond offering a solution to a problem: sharing school capacity with children from the street, the Open Door project is a signal of hope, motivation, awareness and willingness. It aims to change a system that is built around socio-economic differences and persistent structures. Here lies potential to create even more impact: how can Millennium School further lift this off the ground, and organically grow the initiative that’s behind the campaign?

Because today, even when private schools share part of their capacity for free with disadvantaged children (as part of the “Right to Education Act”), a lack of access to information or the right social connections prevent that the poorest can access these “free spots”. This shows that the underlying problem isn’t solved with making the right resources available. Bringing the right community groups together, getting the right message across and enabling them to mobilise are tough but important factors. With The Open Door project – gaining momentum by collaborating with the biggest Indian NGOs – we assume that the project is part of a bigger plan. We are curious about the follow-up they have in mind and how the different groups collaborate to ensure inclusion of every hungry mind that’s still hold back from education today.

Creating a buzz: from ideal to action

It’s clear and moving how the Open Door Project create visibility for and speaks to the abundance of young children, hungry to learn. In addressing the crisis around education in India, the complete idea and collaboration behind this campaign is ground-breaking, in being a disruptive way of investing in the future. What drives the campaign is clear: it’s about the impact that will be notified in 5 to 10 years from now.

We hope this project will be an inspiration that shows how conventional patterns or structures can be broken down and how existing dichotomies can be diminished for the collective benefit. The Open Door project is a wonderful initiative to hopefully inspire many more schools to open up their doors. Education is after all priority and it can drive children “off the street and on their feet”. One thing is clear to us: the campaign has given feet to the initiative of private schools to open their doors for underprivileged children: a community break through. Will this set new direction to old conventions and inspire larger-scale action?

Want to know more about the project? Watch the video.